Often known as the Third Battle of Ypres or Passchendaele, the offensive began with encouraging gains but terrible summer weather soon bogged it down. By August the offensive was clearly failing in its objectives and had descended into attritional fighting. New techniques by both sides led to agonisingly slow forward movement for the British at enormous cost in casualties to both sides. Bad weather in October led to the battlefield becoming an impossible quagmire.

The AVMM memorial ceremony to honour George Robins, a former Adderbury Morris dancer, was held on Saturday 9th September at 10:30 am. Private Edward George Robins (1st/6th Battalion, the Gloucestershire Regiment, 144 Brigade, 48th Division, Army no. 267404) died from his wounds on 9 September 1917 aged 23 – he has no known grave. His regiment had been fighting at Ypres. The son of Frank and Rose Robins  he was born in Twyford and is remembered on panel 72 to 75 of the Tyne Cot Memorial.

St Mary’s Church bell-ringers rang a Quarter Peal at 10 o’clock, so we met at the lych-gate in Morris kit while this was still in progress. We gathered in the churchyard to plant a poppy cross in the Garden of Remembrance to the accompaniment of the eight half-muffled bells. Moving into church, we then performed a modified repeat of the ceremony we held at Tyne Cot. The proceedings were led by Jim Plester, using Bryan Sheppard’s text from 2008. David Reed read the poem Dulce Et Decorum Est by Wilfred Owen. The wreath provided by Edd Frost & Daughters was laid by Chris Garrett below the war memorial in the South wall, followed by a pause for silent remembrance. John Ekers read the poem Prelude by Robert William Service. The ceremony concluded with a celebration of the return of the Morris to the village through the efforts of Bryan Sheppard and Jim Plester among others, by us all singing The Happy Man. Six men then danced Shepherd’s Hey in the church aisle. This was preceded by the music once through on the instrument of the trenches, the harmonica played by David Reed. The main musicians were Jim Plester and Malcolm Wood. Men present were Troy Daniels, John Ekers (Squire), Christopher Garrett, Ryan Jamniuk, James Plester, David Reed, David Snell, Richard Teare and Malcolm Wood. 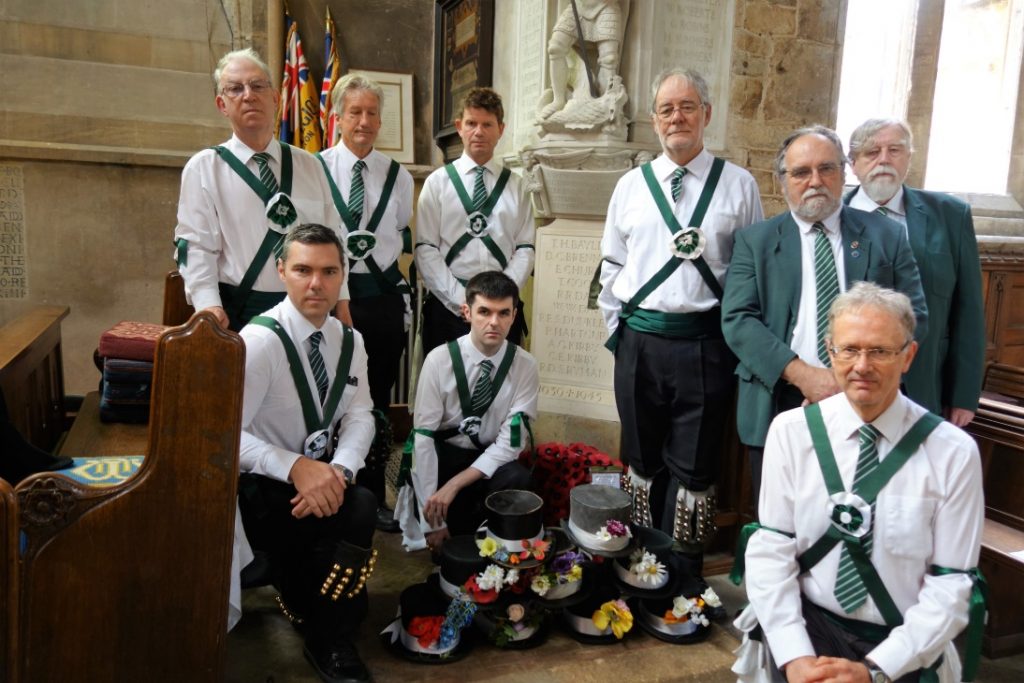 Afterwards we danced Beaux of London City, Black Joke and Lads a’Bunchum, outside the library in Mill Lane.