The Arras offensive 9 April -16 June 1917 was fought on the Western Front during World War One. The British were called upon to launch an attack in support to a larger French offensive. British troops attacked German defences near the French city of Arras and achieved the longest advance since trench warfare had begun. The British advance slowed in the next few days and the German defence recovered. The battle became a costly stalemate for both sides and by the end of the battle the British Third and First armies had suffered about 160,000 casualties and the German 6th Army 125,000 casualties.

The war of 1914 – 1918 claimed the lives of thirty men from Adderbury. Each of these men is being commemorated throughout 2014 – 2018 by the bell-ringers of St. Mary’s Church by ringing a Quarter Peal on the centenary of each death. Of these thirty men, four were known to be members of Charlie Coleman’s Edwardian boys Morris side. The second of the Morris dancers to be lost was Private Harry Laurence Wallin of 1st Battalion, The Border Regiment, 87 Brigade, 29th Division, who was killed in action on 19 May 1917 in the fighting in the Somme. He was 23 and his body was never recovered.

The Adderbury Village Morris Men honoured these four men, none of them having a known grave, by visiting their memorials in 2008, the 90th anniversary of the ending of WW1. Harry’s name is engraved on bay 6 of the Arras Memorial. He was the son of John and Elizabeth Wallin of Adderbury.

We are again paying tribute to these past dancers by adding our own ceremony to the occasion of the bell-ringing. The Quarter Peal was being rung at 7:45pm on Friday 19 May 2017, so we met at the lych-gate in Morris kit at 7pm to remember Harry Wallin killed 100 years ago. We gathered in the churchyard where Peter Jordon planted a poppy cross in the Garden of Remembrance. As we bowed our heads we heard distant thunder, eerily reminiscent of the sound of shelling that Harry must have endured. 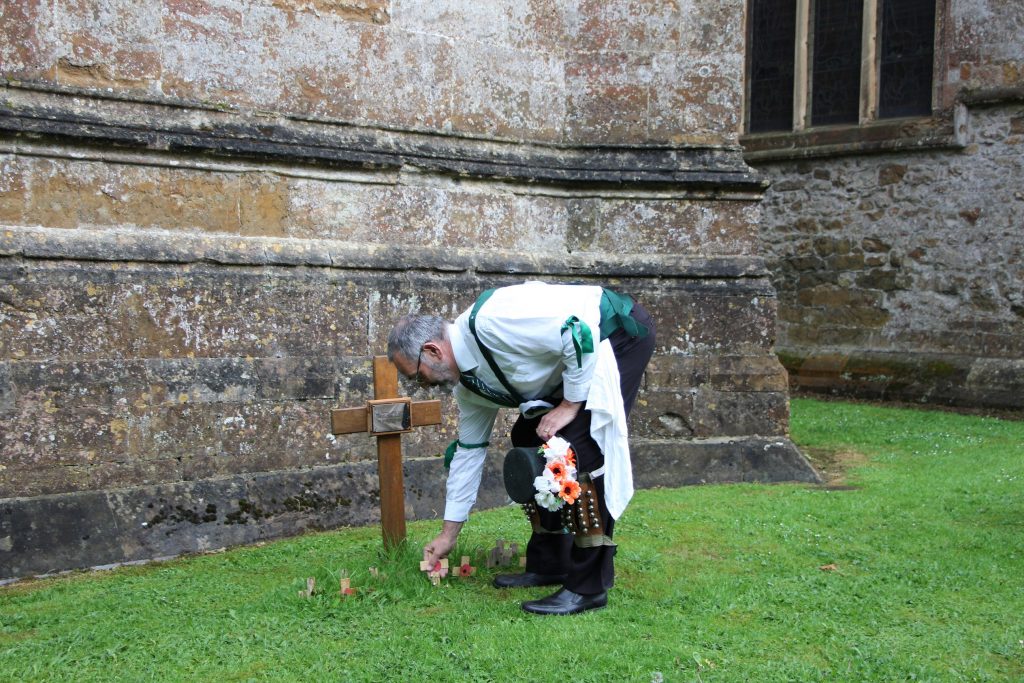 Moving into church we then performed a modified repeat of the ceremony we held at Arras. The proceedings were led by the Squire, who is indebted to Bryan Sheppard for the use of the text from 2008. Jim Plester read the poem Aftermath by Siegfried Sassoon. The wreath provided by Edd Frost & Daughters Family Funeral Directors was laid by Past Squire David Reed below the war memorial in the South wall, followed by a pause for silent remembrance. Chris Garrett read the poem The Courier by Richard Shindell. The ceremony concluded with a celebration of the return of the Morris to the village through the efforts of Bryan Sheppard and Jim Plester among others, by us all singing The Happy Man. Spirits were then lifted by a performance of the Shepherd’s Hey. This was preceded by the music once through on the instrument of the Trenches, the harmonica played by David Reed. The main musicians, Jim Plester, John Wright and Malcolm Wood took over for the six-man dance.